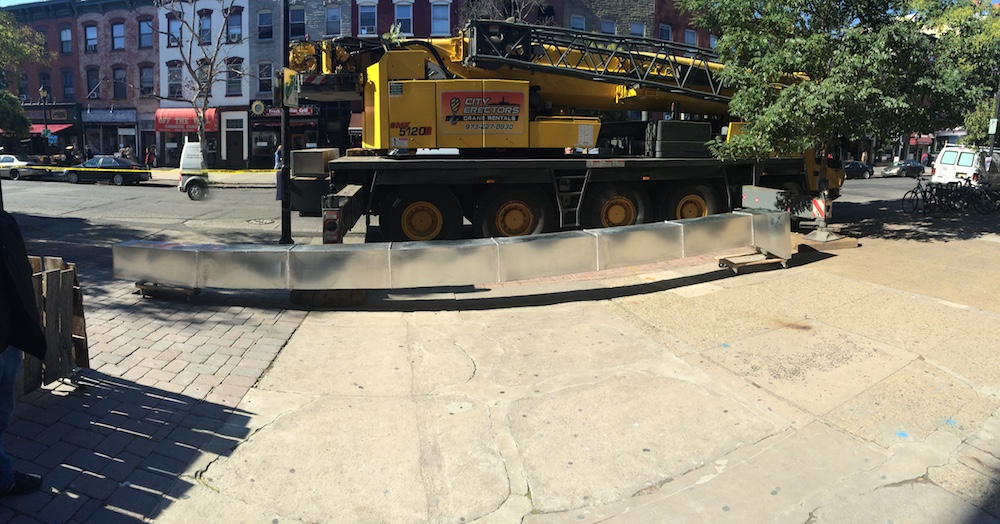 Update To This Article: We DO NOT recommend the hood installer we used. They did not seal our vent properly, so it caused smoke and grease to leak out. It also caused a downpour of water whenever we power washed it. Also, they did not install the right size motor, so our hood was not functioning properly and it led to smoke filling up in our store, which set off the smoke detectors more times than we care to admit.

One of the most important aspects of building out a restaurant is always going to be the hood and ventilation system install. The entire flow and function of the kitchen will be dependent on where you install your hood, how you install it and who installs it. It’s always serious business trying to figure out where to put your hood system, especially when residential units are located above your restaurant. This was by no means our first go with having a hood system installed as this is not our first Flatbread Grill buildout. However, we were really cautious and nervous about where we would be installing the hood and ventilation system because this would determine where our kitchen was going to be set up. When we were first scouting out the Flatbread Grill location in Hoboken, NJ, one of the first things we did when we entered the space was make sure we would be able to install a hood and vent system. We went over several options and discussed it thoroughly with several people present, including our architect, a building engineer, and a restaurant equipment specialist. You can go back and watch a short video clip of us trying to figure out our kitchen layout here with our architect: http://youtu.be/6W9Bu0A10i0. People are often surprised to learn that Flatbread Grill operates a full commercial kitchen where we grill our meats, make our propriety sauces, and bake our specialty flatbreads. When you operate a full commercial kitchen, the kitchen hood and ventilation system becomes the anchor that everything else in your restaurant revolves around.

Another major issue to address when contemplating the install of a kitchen hood and ventilation system is not only fire code, but also how an HVAC system will function within the space. A kitchen hood system serves several important purposes- one being, to suck up all the heat emanating from the cooking equipment, as well as function as an emergency way to put out any potential fires caused by open flame cooking, and to bring in ‘fresh air’ through a make-up air system. The hood system, when it is turned on, is sucking up the air within the immediate space and fresh air must be brought back in through the make-up air system. Usually, an HVAC system in a restaurant has to be at a higher ton than in a dry goods or retail space because of the way air is exhausted and recirculated through the hood and make-up air system. This is where a building engineer usually comes in handy to evaluate whether or not you have enough HVAC power to stay cool in the summer and warm in the winter.

We met with the ventilation / hood installer early on in our restaurant project to do a site survey for the Hoboken, NJ location of Flatbread Grill to make sure it was going to be possible to install a restaurant hood system into what used to be a former fro-yo shop. After we got the okay from them that a hood and ventilation system could be installed into the space, our next step was to figure out where and how. We were very limited with where the hood could be placed because there was a fire escape in the back of the building AND a building connected to ours that was not owned by the same landlord, which meant absolutely nothing of ours could be attached to it.

The duct work was going to go up three floors, which meant that no residential windows could get blocked off. All of these restrictions, as well as the size of the space meant we had to make a decision to reduce our kitchen imprint, so we decided to eliminate the use of a type 2 hood and strictly use a type 1 hood. A type 2 hood is used for convection ovens, baking ovens, and pizza ovens. We had 114 inches to work with, so we figured we can upgrade to a more efficient convection oven that will fit underneath the type 1 hood and eliminate the bigger, bulkier oven we used in the past to bake our specialty flatbreads.

The overall installation of the system, once we received approval from the zoning, health, fire AND building department, went rather smoothly. Having the hood system ready to go helps us visualize how our kitchen setup will flow. It’s exciting and nerve-wrecking at the same time because now that the hood system is built, it all seems so much more real. We are quite happy with the way the whole installation of the hood went for our next location of Flatbread Grill in Hoboken, NJ! One major part of construction is completed and now that we know exactly how our kitchen is being laid out, we can focus on the rest of construction.

Visit our YouTube channel to watch a video clip of the installation process: YouTube.com/EsendemirSisters

Proud to contribute in some small way to the Ameri

OOoohh my God… look at… @thumbbread is now ava

Incredibly grateful that these past few months hav

It has been a wild six months since launching @thu