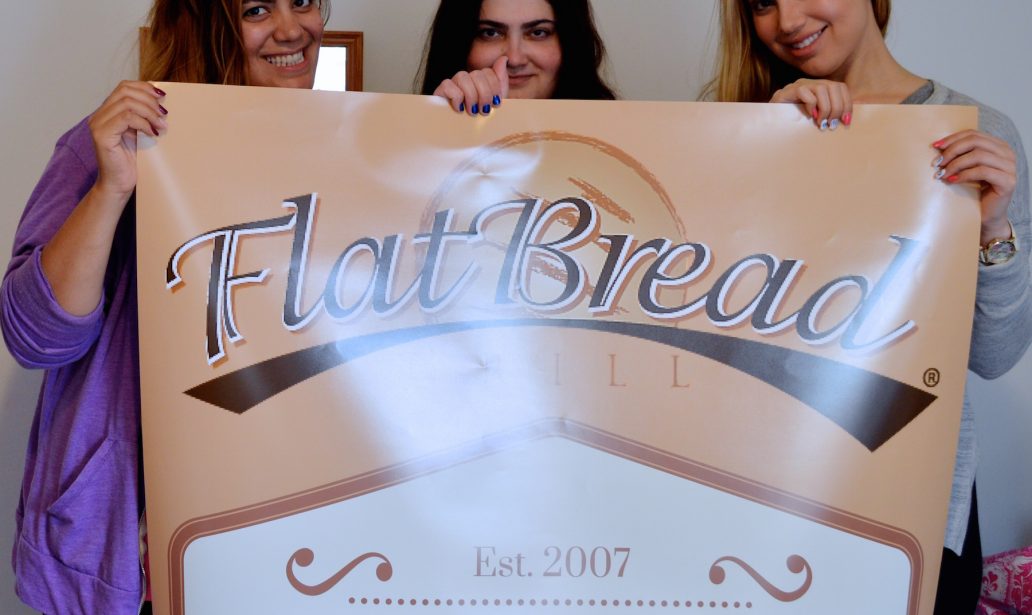 When we embarked on the journey to build another Flatbread Grill restaurant, we didn’t know what challenges or obstacles laid ahead for us. we did anticipate a great deal of work and we knew there would be challenges, but we couldn’t fully know what to expect until we finally started the project. When we built our first Flatbread Grill almost a decade ago, there were a fair number of obstacles and difficulties to deal with along the way. It was also the first time we were hands in charge of building a restaurant, so it was a learning experience and there were many mistakes we made along the way that we promised ourselves we would never make again. Of course, some things that occurred during the buildout of our first Flatbread Grill were in our control and some things were not, as was the circumstance this time around in Hoboken. Through the entire year long process, we had moments of complete hopelessness, frustration, exhilaration, and excitement. It was a new chapter for us and there were new (and old) obstacles to overcome. Through it all, even in the most bleakest moments when we wanted to give up or we found ourselves at wit’s end- we kept going and that made all the difference. It would have been easy to throw the towel in, considering the massive delay and financial strain we experienced as a result of hiring the wrong contractor. But what matters most is that our tenacity, perseverance, and determination kicked into overdrive and picked ourselves up off the floor each time we got knocked down. We kept going and as a result of that fortitude, our new restaurant is almost complete. We will soon have the pleasure of opening up our doors and inviting in people from all walks of life to enjoy our creations and become a part of our extended family.

We shot video and took photos almost every chance we had at the construction site or while we were out running various errands for the buildout. We did this for two reasons. The first reason is because when we built our first Flatbread Grill, we didn’t have smartphones or social media to share the experience with others, which eventually led to people wondering (and doubting)  if we were really even responsible for the end product. The next reason and one of the most important reasons was because we wanted to share our journey and experiences with others who dream about starting up a business, especially a restaurant. Restaurants are tough businesses to start up and sustain. People consistently look to us for advice, mentorship, and inspiration, so we feel a sense of responsibility to share our experiences as much as possible in the hopes that others will feel empowered enough to pursue their own dreams. So here it is: our year long journey of trying to turn nothing into something!

LOCATION AND LEASE NEGOTIATIONS
It always begins with finding the perfect location and negotiating a commercial lease for your restaurant. We searched high and low for quite some time before stumbling on a space in Midtown Hoboken. We lost spaces over the past few years to bigger competitors with more resources than us, so finally landing a space close to home in a town we love and adore was an exhilarating feeling. Searching for prime real estate in a competitive and very desired market as an underdog isn’t very easy, but luckily, we had established a strong reputation over the years that encouraged landlords to believe in our business model and give us an opportunity to be their tenant. We had learned several hard lessons from our experience with our first landlords at the very first location of Flatbread Grill, so we proceeded with much more caution this time around. In addition to the lessons learned from dealing with our first commercial landlords, we had also learned a great deal about real estate and lease negotiations by consistently dealing with brokers, looking at spaces, discussing leases with our real estate attorney, and putting in LOI (letter of intent) after LOI. No matter how many times we were rejected or we lost a space to a competitor with more money- we never gave up our search. Our persistence paid off in May 2014.

ADVICE FOR ENTREPRENEURS: We encourage any entrepreneur who dreams of starting up a business that requires a physical location to do their research and learn about leases. Dan Rowe, CEO of FranSmart, was always there to give us advice and answer any questions we had about finding a commercial space. We wished we had someone like him on our first go round!

We found a space in our hometown of Hoboken, NJ, a very prime, highly desirable market on the East Coast (right outside of NYC), with a landlord who believed in our concept and truly wanted to see us succeed. The broker representing the space, Carol Valentino, from Liberty Realty, was very helpful during lease negotiations and very supportive. We went back and forth several times during negotiations, but the landlord remained patient and reasonable throughout the whole process. All in all, we hung in there and by the middle of May 2014, we had signed the lease and put in our security deposit.

ADVICE FOR ENTREPRENEURS: Don’t ever sign a lease without having an attorney look it over! Hire yourself a great real estate attorney to help guide you through lease negotiations.

LAYOUT AND FLOOR PLAN
After the location is locked down, the lease is finalized, and the landlord gives you the key- it is time to begin planning the layout of your restaurant. We went into look at the space several times and asked our architect to make a site visit while we were in lease negotiations because we wanted to make sure that the space could be converted into a restaurant. One big mistake many people make is renting spaces that may seem inherently easy to convert into a restaurant, only to find out during the planning stages it cannot be done. We knew going into it that the ventilation and hood system would be very important because this was not a freestanding building. There were residential units above the space, which always poses a big problem with hood installations. Some city ordinances, as well as fire codes prohibit how and where you can install the duct work for a hood. Luckily, the property had a courtyard in the back that allowed for a hood to be installed, but it had to be done as not to obstruct the residential fire escape.

Once we knew where the hood would be installed and where our kitchen was going to be set up, it was a little easier to figure out the seating arrangements. We spent many, many nights and days in the space, taking measurements, discussing, brainstorming, banging our heads against the wall in an attempt to make sure we had exhausted every single possible outcome for our kitchen setup. In the end, we came up with a decision that was satisfactory to all of us, seemed efficient and followed all the proper codes and ordinances. Our architect went to work on the floor plan and brought in a building engineer.

ADVICE FOR ENTREPRENEURS: Finding a knowledgeable, experienced architect is vital when opening up a physical location. Restaurants require very specific requirements, so finding an architect who has worked on restaurants before is very, very important.

The floor plan preparation and approval process took a few months as the plans had to be prepared, documentation had to be submitted to the City of Hoboken, and approvals had to be waited on for the whole summer. The approval process is lengthy in almost every single town you try to open up a location. Some towns move faster than others. In our opinion, the City of Hoboken moved fast, considering how much construction is going on in this vibrant city at any given time. We had to submit plans to the zoning department first, then to the health department, and then to the building department. We also had to go before the Hoboken Historical Commission to gain approval for our exterior design and sign. The process that was one of the most difficult at our first location in Montclair, actually ended up being the easiest in Hoboken. The Historical Commission is reasonable and really has a sincere interest in not only preserving the historical integrity of Hoboken’s main street, but also cares about the businesses opening up and takes financial constraints and such into consideration.

Once all of our approvals were put into place, it was time to apply for permits. Our contractor, as we would later find out, was so inexperienced (more on that in part 2) that he didn’t even realize an application had to be submitted to the building department in order for him to receive permits.

You can watch a short video of us discussing our kitchen layout: https://www.youtube.com/watch?v=6W9Bu0A10i0